Malaysian is fascinating as a would be melting pot, as I’ve mentioned before.  Here in Penang, a mosque is a neighbor to a Chinese temple, not far from an Indian temple.  Sprinkle in the occasional Christian church and then you may better understand why this country has 14 national holidays (US has 11).  As we landed during Chinese New Year, the temples were decked out.

We went by this temple three times before finding the way to access it.  Hidden by shops to purposefully obscure it’s meeting place, this temple is home to the Khoo clan from a specific village in Hokkien province of China.  Khoo Khongsi temple was built in the 1884 and destroyed in 1901 reportedly because it was too aggrandizing with its gold and paintings.  Rebuilt in 1906, it stands today- the same and different.

Before we’d found it, I knew it from the book An End of Rain.  The main character’s grandfather was from the Khoo clan, and took his previously estranged grandson there to help connect with his roots.  He described the ornate exterior and equally spectacular interior.  He told of a room where his grandfather took him to in order to connect with his lineage- The Hall of Ancestors; tablets identified Khoos near and far, many with credentials and degrees from universities throughout the world. 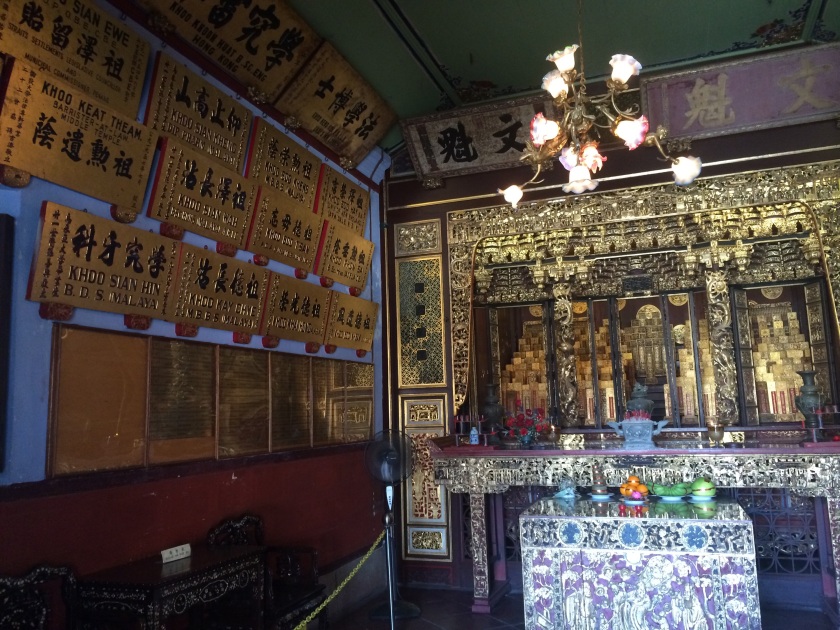 It proved to be a peaceful refuge, full of history and art.  Anecdotally, it was also where Anna and the King was filmed as Thailand would not host that crew.